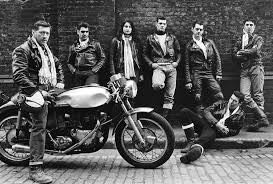 A cafe racer  is a lightweight, lightly powered motorcycle optimized for speed and handling rather than comfort – and for quick rides over short distances. With bodywork and control layout recalling early-1960s Grand Prix road racing motorcycles, café racers are noted for their visual minimalism, featuring low-mounted handlebars, prominent seat cowling and elongated fuel tank – and frequently knee-grips indented in the fuel tank.
In 1973, American freelance writer Wallace Wyss, contributing to Popular Mechanics magazine, wrote that the term cafe racer was originally used derogatorily in Europe to describe a „motorcyclist who played at being an Isle of Man road racer“ and was, in fact, „someone who owned a racy machine but merely parked it near his table at the local outdoor cafe.“ The term developed among British motorcycle enthusiasts of the early 1960s from Watford, and London, specifically the Rocker or „Ton-Up Boys“ subculture, where the bikes were used for short, quick rides between cafés, in Watford at the Busy Bee café and the Ace Café in London. In post-war Britain, car ownership was still uncommon, but by the late 1950s the average Briton could now afford a car. So by the early 1960s the café racer’s significance was that a bike had come to represent speed, status and rebellion, rather than mere inability to afford a car. (Source: Wikipedia) 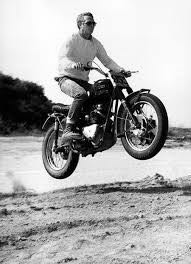 The scrambler motorcycle is a type of bike which isn’t easy to place in a box. So, to give the scrambler bike a clear explanation isn’t easy either. But one thing is for sure – it’s a bike built for off-road and street use. The term “scrambler” has been in common use in the United States since the 50’s and 60’s to describe a street bike with off-road potential (or ambition). However, the word actually has its roots much further back in the 1920’s, when British riders raced across a mix of terrains. According to an urban myth, a British commentator of the day described one such race as ‘quite a scramble’ and the phrase stuck. Today in the custom bike scene, a scrambler is a healthy mix of a (retro/old) bike with a higher than average riding height and shocks, and dual purpose tires, stripped down to the bare essentials.